CountDown is a program for generating :
This is useful for time-trial sports like orienteering  with competitors starting at regular intervals over a long period. Instead of a volunteer announcing each start time and any instructions  and then starting each group of starters, an mp3 recording can be played with the same information on it, or the autonomous sound clock can be used.

The startrobot software can be downloaded from here.
This file has all the source files and an executable file built for the Raspbian operating system (Raspberry Pi). To use this software you ideally need a device with a real-time clock and configure it to run the program at start-up. When the program runs it will examine any mounts on devices named /dev/sd*. This is where Raspbian normally mounts USB sticks. If there is such a mount, it examines the top level directories in the mounted location to see if any of them contain an export folder from CountDown. If they do, the program starts playing the schedule on a real time basis.

The advantage of using the autonomous approach over the MP3 player version is that nobody has to fart-arse around with the player to position the playback, the robot does it in real-time.

CountDown itself will only run on the Microsoft Windows platforms at the moment. The "startrobot" software is only built for Raspberry Pi, but feel free to recompile. It requires C++ with some C++11 features.

The help included with the product is incomplete, but since release 0.8, the software has been made fairly simple to use.

This Windows software is currently free (as in beer), rather than free (as in speech). See the licensing information at the foot of this page if all that stuff worries you.

The best way to figure out whether CountDown has the functionality you want is to try it. You can click on the picture below to see the main interface. 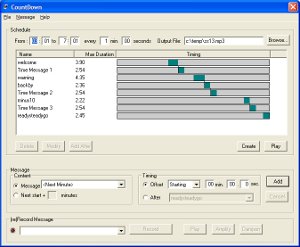 If you have some sound that you want to use in a CountDown recording, then you will need to follow these instructions (some technical skill required):

There is a recording of a 5-second countdown (with beeps) of the style used for orienteering and downhill skiing here.

To actually use the recordings that you create you will need something to play the mp3 file on and something to amplify the sound (depending on what your chosen mp3 playing device is).

Playing recordings on a PC

The created recordings have a lot of blanks in them (when nothing is being said),  the MP3 format compresses these away to virtually nothing and PC-based players, particularly Microsoft Media Player have a lot of difficulty in repositioning within such a file if you want to cue the recording up to a specific point.


Playing recordings on an MP3 player

If  you don't already have an mp3 player, then you should be able to buy a 128MB mp3 player for about $20 on ebay.  The features that you should look out for are:


Pump up the volume

If you don't want to lend everyone your headphones, then you will need some battery powered speakers - the louder the better if you are using them outdoors. We'd recommend as many watts as you can afford - the very cheap 0.75 watt speaker we initially bought just wasn't up to the job.  As a rough guide, if the speaker(s) use less than 6 AA batteries, they probably won't be up to the job.

Use NiMH (Nickel Metal Hydride) rechargeable batteries for the player and the speaker. If you are worried that they will run out, take spares.  Check how many mAh each battery stores - the bigger the number the better (and more expensive) - aim for 2000mAh minimum for AA batteries. AAA batteries usually come in much smaller capacities, but go for the largest you can get.

The program is free for you to download and use.